My name is Nadira Murray, wife of Craig Murray. On the 7th of June Craig will be sent to prison per your decision under the law of contempt of court.

I understand and fully support your decision of protecting sexual assault victims however I do not feel Craig has been judged fairly. Craig even wouldn’t tell me the women’s names or identities, or ever foul mouth them during the trial when I asked about it.

Craig does protect and previously had directly helped many women who suffered abuse including a few women’s asylum seekers’ cases, without any payment.

In my country Uzbekistan, he sourced British government funding as well as giving his own money for victims of domestic abuse in a hospital refuge in Samarkand. These were women who had attempted to burn themselves to death with kerosine this is a local culture for abused women.

I have been living with Craig for almost two decades now, and I know him as a gentle soul, a helpful human being, a kind partner and a loving dad to his four children.

Having come from an abused background and then police state, I know exactly what trauma is, and your unfair decision is a form of power abuse, which brings back my own PTSD trauma from my own country from authorities.

I gave birth recently, with a 3 months old baby now, and have a 12 year old son, and my work from home – Craig has been a helpful hand and the main income in the household. My children need their daddy, I need my partner.

Him being under my watch (as his doctors stated his conditions are pulmonary hypertension, APS and atrial fibrillation, among other illnesses) I worry his health is not suitable for the prison which you ignored and took away his basic human rights. Prison hospitals are not suitable for his type of serious illness!

I believe you are sending him to a deliberate death sentence knowing and ignoring his health conditions.

I urge you to reconsider the sentence and allow Craig to be at home with his children who need him. 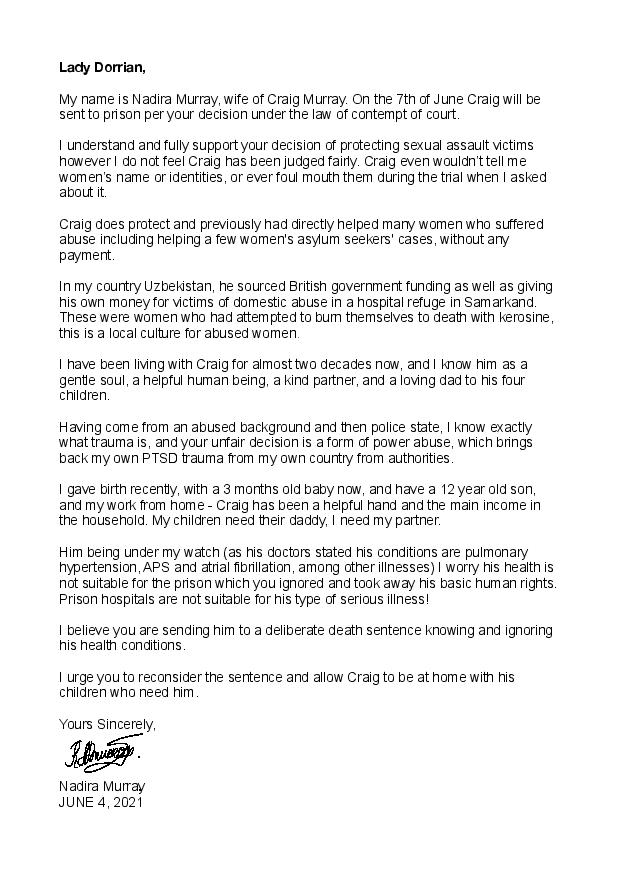 316 thoughts on “An Open Letter to Lady Dorrian”