I would dearly love to say that I am a friend of Peter Tatchell, but I can’t really claim to be more than an acquaintance and perhaps ally. We have shared a platform several times, always say hi to each other at demos and events where we see each other, but have never really had a personal conversation. Peter always appears to me somewhat withdrawn; a mutual friend described him to me as aloof. I think he is shy, which seems a strange thing to say about someone whose life has been, as the new Netflix documentary Hating Peter Tatchell makes plain, a series of spectacular and often individual performance protest events.

In the documentary you see Peter get brutally beaten by nationalist extremists in Russia, and by Mugabe henchmen in London. You see some remarkably un-Christian blows hit him as he is removed from the pulpit at Canterbury cathedral. You learn his mum was a religious bigot and he was very brutally beaten, as attested by his mother and sister, by an extremely violent stepfather, who looks in photos a caricature thug. There is a fragility and vulnerability about Peter that makes you want to protect him; but he still ventures into danger.

The documentary features almost exclusively Peter’s campaigning for gay rights, which is a weakness as his canvas is much broader than that. There are some interesting ironies along the way which are missed. It refrains from pointing out that the victor and beneficiary of the appalling homophobic campaign against Peter in the Bermondsey by-election was Simon Hughes, himself then firmly in the closet. Extracts from a Glasgow TV show, in which Tatchell is heavily criticised by young people for “outing” gays, very briefly show the show’s host John Nicholson – who I am pretty sure was himself in the closet at the time.

It is very good to be reminded by this documentary that widespread and open homophobia was a major force in British society right through the 1980’s. Peter Tatchell deserves a place in history as one of the leaders in changing that, and I am proud to know him. I strongly commend the documentary to you. However its weakness lies in trying to squeeze Peter through the Overton window. By focusing on gay rights alone, it can portray Peter as the victor, who is now in line with accepted attitudes.

The documentary explicitly states he became a “national treasure” when he took on Mugabe. The big set-piece is his taking on Putin’s Russia by traveling to the World Cup and demonstrating in Red Square against the killing and torture of gays in Chechnya. Any pro-gay demonstration in Russia takes enormous courage, but the police dealing with him on this occasion were polite and non-violent and he was released the next day. Peter is however quite right in outlining discrimination against gays in Russia and Putin’s tolerance or even encouragement of it. The accumulation of Overton-signaling soft targets towards the end of the documentary is completed by a brief clip of him interrupting Jeremy Corbyn to protest against human rights violations by Assad.

I don’t exactly blame the documentary makers, who had to sell the film and get at least some of their money back, but this mainstream media friendly Tatchell is just one corner of the picture. He does not just take on designated western enemies such as Putin, Mugabe and Assad.

Peter has been an extremely dedicated supporter of Julian Assange, turning up repeatedly for years outside the Ecuador Embassy and at subsequent demos, often alone and unannounced, and without pushing himself forward to speak (I have found a reluctance to integrate Peter into the Assange defence campaign, which puzzles me).

The documentary shows him trying to arrest Mugabe but there is no mention of his still more spectacular ambush of Blair’s motorcade and attempt to arrest the war criminal. His steadfast and active support for Palestine, his opposition to Trident and to the Iraq and Afghan wars, all this is shown only in the end credits by the banners he is holding. His long-running campaign against Saudi Arabian human rights violations, and those of other Gulf states, is ignored in favour of Western “enemies”.

This is my favourite Tatchell placard: 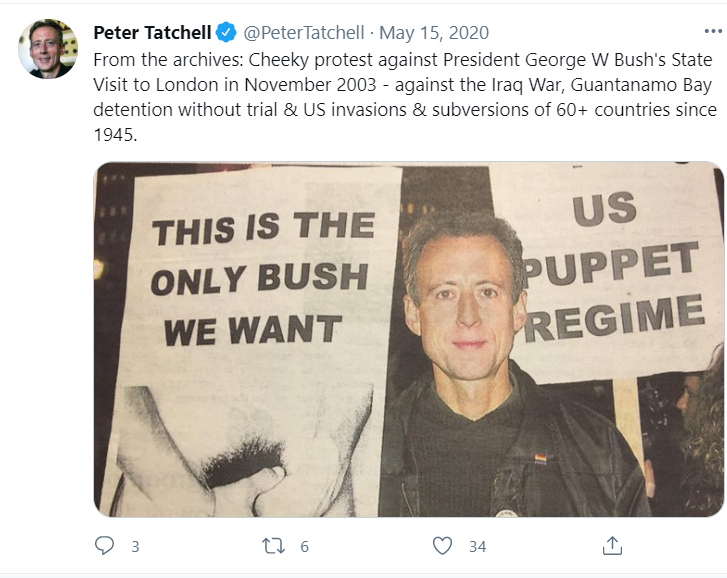 Peter Tatchell is, to me, a great hero and always will be. I probably do not agree with him on every single issue, but no sentient human being should ever agree with any other on absolutely everything – if you do, one of you is not actually thinking.

A final thought. I have repeatedly stated that the Westminster government will not voluntarily give up Scotland, and only agreed to the 2014 referendum because they thought it impossible to lose. They got a huge shock and will not go that route again. Winning Scottish Independence is almost certainly going to involve a measure of civil disobedience. This documentary is a profound lesson in how civil disobedience can bring about social and political change, and the sacrifices it entails, and I urge you to watch it with that perspective.