Footage has emerged of the Uzbek authorities cleaning up a huge amount of blood after suppression of protests in Nukus, Uzbekistan. 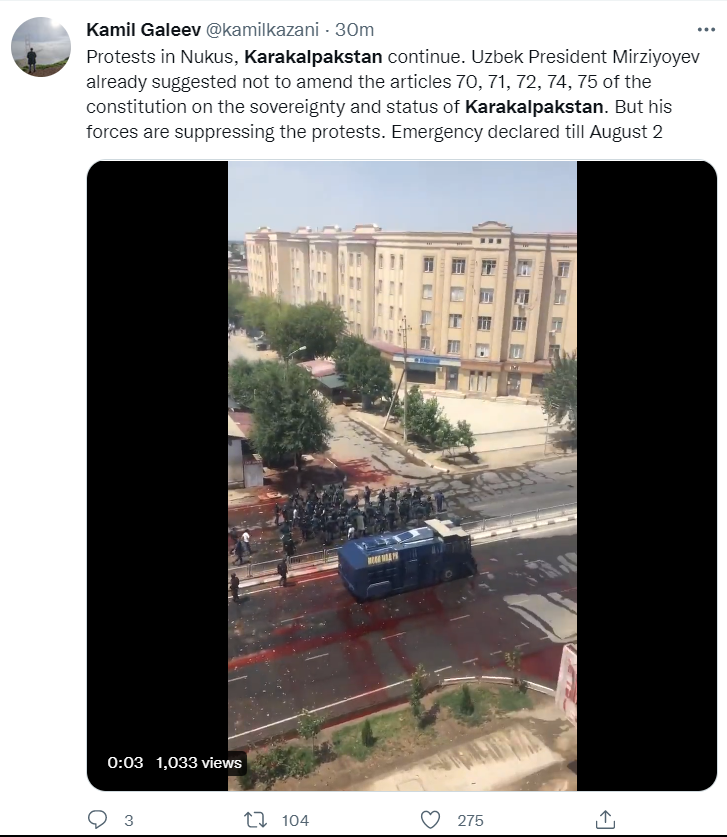 The Karakalpaks are a separate ethnic and linguistic group. Karakalpakstan covers a huge area, but almost all of it is uninhabitable desert. A small majority of the population of the autonomous region of Karakalpakstan are not Karakalpak ethnically or linguistically – they are Kazakhs, Turkmen, Uzbeks, Tajiks, Koreans, Tatars and others – but the regional, arguably national, identity is also strong among these groups settled in Karakalpakstan.

Among the historical events that gave the Karakalpak such a diverse population, were mass deportations by Stalin of Krim Tartar from Crimea and Koreans from the Russia/Korea border. The latter group in particular were simply dumped from trains into the desert. Many perished, while others were saved by the kindness of locals. Official provision for their sustenance was deliberately scanty. When I was there in 2001 there were still many eye witness and direct victims of these events fifty years earlier.

Although protest was sparked by constitutional changes aiming to eliminate Karakalpakstan’s regional autonomy, the discontent runs much deeper than that. Karakalpakstan has suffered most from the enormous, almost unthinkable, environmental degradation arising from the destruction of the Amu Darya and Syr Darya rivers and consequent disappearance of the Aral Sea.

Being right at the end of the line for agricultural water from river systems which are massively over-extracted for irrigation of the cotton crop, Karakalpakstan is permanently drought struck and agriculturally impoverished. The massive over-use of fertiliser to maintain the upstream cotton monoculture has left the dried up river beds and Aral seabed as a source of friable poisons swept over towns by wind. That is even without considering the legacy of Soviet biological and chemical weapon research programmes centred on Nukus. 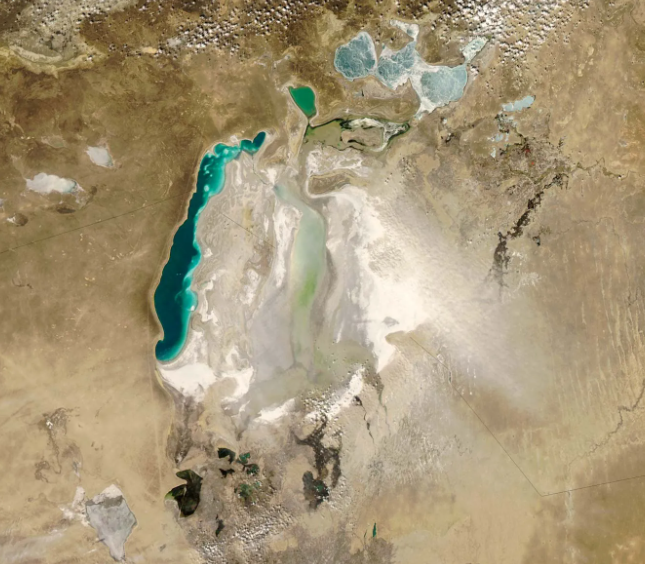 Karakalpaks have had no clout in independent Uzbekistan’s oligarch driven system of government, and benefited hardly at all from having most of Uzbekistan’s oil and gas, the money staying in Tashkent (or rather London and Geneva). To add to this, there is substantial popular racial prejudice against Karakalpaks in the capital. Linguistic suppression both in education and in publications is a further long term factor of discontent.

I don’t currently have good contacts with Karakalpak dissidents, so I cannot give much detail of immediate events. The Uzbek government seems to have combined its usual vicious suppression of dissent with an abandonment of the constitutional proposals which were the immediate spark.

We will see the usual attempts to portray events through a prism understood by people in the West. But this is not anything to do with Islamic terrorism, nor is it a CIA provoked colour revolution. Beware comments from “journalists” who have just found it on the map. It is an attempt, I fear doomed for now, of a suppressed population to assert themselves.