This is how you make a speech outdoors. It doesn’t involve starting a row, getting scared and running away. And the circumstances were much scarier that anything Murphy faced. Here is a clue – all those police aren’t protecting me.

Is this the world’s worst photoshop? 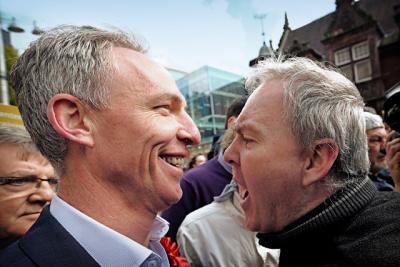 Mr Clerkin appears to have a shrunken head. And the light cannot be shining on Mr Clerkin from top right, and on Murphy from the opposite direction. 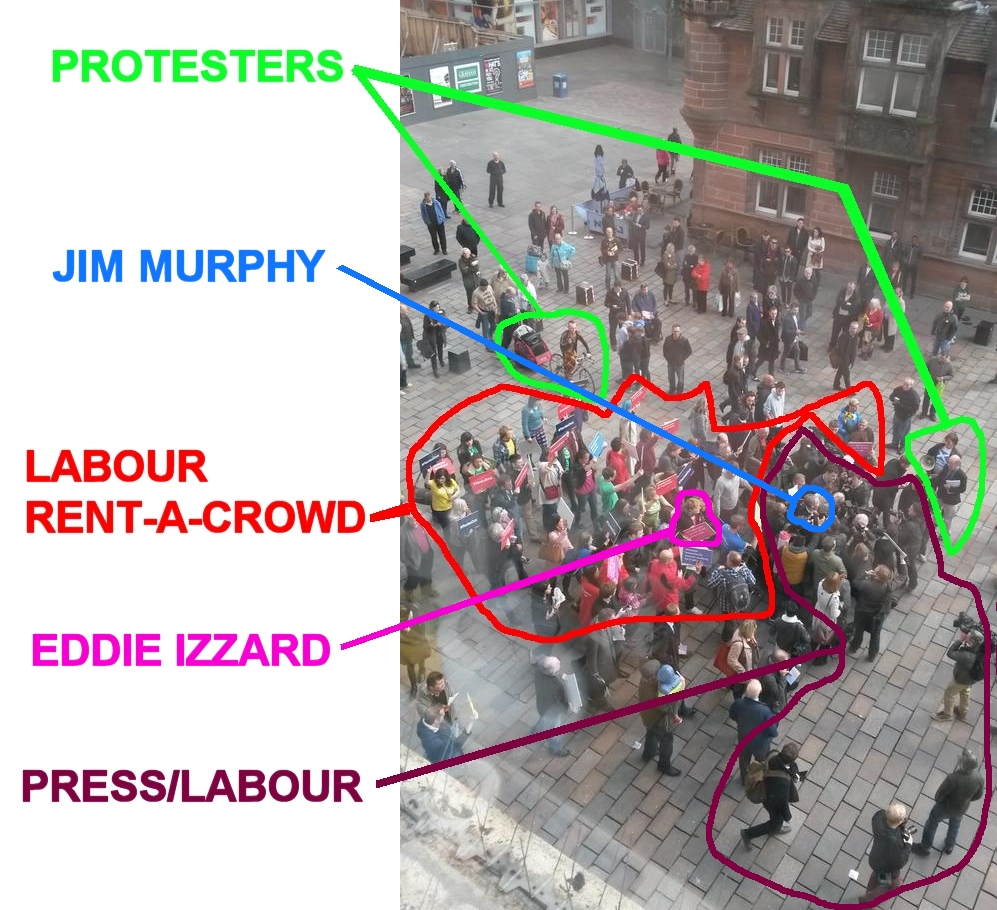 The Mainstream Media are anxious to invoke the “violent nationalists” meme at every opportunity. Today Jim Murphy and Eddie Izzard ran away in Glasgow because evil nationalists shouted back when he was haranguing them. That’s what they did – shouted back. Nobody punched anyone. Nobody shoved anyone. Nobody threw anything. But people had the gall not to listen in hushed silence to Murphy.

The idea is that Murphy with a massive media pack turns up and speaks in front of two dozen Labour activists, who huddle behind him with placards, and the media then show only cropped close shots which make it look like there was a crowd of pro-Labour people. The media do this obligingly several times a day for all the unionist parties, and it works well with closed halls with heavy security. But of course it doesn’t work on the streets, where evil people can have the gall to shout back instead of doffing their caps.

So then a different narrative kicks in, that of evil nationalist violent thugs. Now we have a news story about Murphy and Izzard “escaping” nationalist thugs. But look closely at the video clip in the Guardian, which has gone into unionist orgasm on the story. All the people with the multi-coloured placards are the planted Labour supporters. (Scottish Labour placards have now to be not only red, but also blue and orange, for obvious reasons). At the time Murphy “escapes”, there isn’t anybody apart from the vetted Labour posse within twenty yards of him. And the horrible people who dared to shout back don’t total more than half a dozen.

The Guardian claims there were “minor scuffles”. Watch the video at 11.42 on this Guardian feed. There are no scuffles, except for Jim pushing past people to run away and pretend he was in danger.

It is a trick they have pulled before, and doubtless will pull again.

Radicalism is more diffuse. Its essence can be a cold certainty of the rationalist ability to calculate risk and consequence. Or it can spring from romanticism, the gambler’s instinct, or plain having nothing to lose. (In my case, all of the above).

The First Past the Post electoral system is a historic relic not fitted to a modern society. But by definition elected politicians have done rather well out of it, so have no incentive to change. With the neo-conservative consensus embracing all the main Westminster parties, it doesn’t make any difference who governs us apart from the question of which particular snouts are in the trough, which is no help to the man in the street.

Then along we come in the SNP and challenge some of the pillars of neo-conservatism, like the possession of vast hordes of nuclear warheads, the utility of ever increasing wealth inequality, a pre-Keynesian, Thatcherite attitude to public finance, and trying to get our way in the world by bombing poorer peoples. The SNP has managed to gather enough support for a radical agenda to pass the FPTP tipping point and for the system to work massively in our favour in Scotland. Cue massed panic in the Westminster establishment, including the corporate media. For the first time in a generation, people have appeared on a main television channel arguing that possession of weapons of mass destruction by the UK is not a good thing.

Whole sections of the Establishment have therefore woken up, for all the wrong reasons, to the fact that FPTP is a bad system. Yet neither the Blue nor the Red Tories are likely to embrace proportional representation.

The Blue Tories will not embrace PR because they are the Stupid Party. There is a right wing majority in England. If you separate Scotland, then UKIP and the Conservatives have about 48% of the vote in England compared to about 42% for Labour plus the Greens. I have left the Lib Dems out, though post Clegg they might fairly be added to the conservative total. Because of this right wing majority outside Scotland, PR would keep the Tories in government almost all of the time, though generally in coalition.

By contrast the Red Tories would be stuffed by PR. There just is not enough support for them, even after five years of a very unpopular coalition government. The reason there is not enough support for them is that they do not offer any kind of real alternative in policy. More austerity, more nukes, just fronted by an even less appealing set of neo-con “personalities” than the Conservatives in Miliband, Balls, Cooper, Murphy and Alexander.

What the SNP have shown is that there is a real public hunger for a more radical politics. PR would be the death of the Labour Party because the large majority of its voters lend the party their support purely to keep the Tories out, not because they are enthused by the policies or the line-up. PR would give the chance for a genuinely radical alternative to grow. There are legions of Labour supporters who would love to vote Green but fear it would let the Tory in. Under PR, other left alternatives besides the Greens would soon blossom. The Red Tories don’t actually have a unique offering to the public. There is not really a market niche for another set of Tories. They are maintained entirely by the inertia of the FPTP system. And they know it.

Expect a lot of angst about FPTP following major SNP gains. But do not expect the Establishment to do anything about it – the status quo suits them fine.