Unionist propaganda is still streamed out of the mainstream media every day. If nobody counters with the case for Independence, support for Independence will never increase. The latest YouGov poll putting us back at 46% is probably accurate. The idea that you wait until support has – by magic – increased to a regular 60% before you start campaigning is self-evidently delusional.

We started the referendum campaign at – at best – 32%. Through street campaigning, new media and the people’s energy, against the concerted might of the mainstream media, we got it up to 45%. We can have that effect again. Starting at 46%, I have no doubt that we can get it well over 50% in Indyref2.

It was the Yes movement on the ground that did this, through street campaigning, town hall meetings and social media. And never forget this – while the SNP were a valued part in that, were our wedge into mainstream media, and had Alex in the debates, the official SNP were a minority in the ground war Yes campaign. It was only after the referendum that the Yes campaigners piled in to the SNP. That brought in some of the SNP’s best new MP’s, like Tommy Sheppard, Mhairi Black and Chris Law. But have you seen those great campaigners arguing for Independence in the last twelve months? No. Party discipline has silenced them.

There have been a number of ruses by Nicola to avert the desire of the membership to campaign for Independence.

*We had the promised “Summer of Independence” campaign which was simply forgotten.
*We had the avoidance of an Indyref2 promise in the manifesto through the “material change” clause
*When “material change” undeniably happened through the EUref, we had the avoidance of Indyref2 through the “panel of experts” – a body of mostly ultra-establishment people, almost all neo-liberal, including the secretary of the Bilderberg Group, who will produce an anti-Independence report.

We now have the latest ruse to put off campaigning for Independence and it is transparently thin. The idea is to keep the activists happy through till the New Year by holding – then analysing the results of – a “national conversation”. This is simply an opinion poll. Here are 80% of the questions (all I could grab in a screenshot). 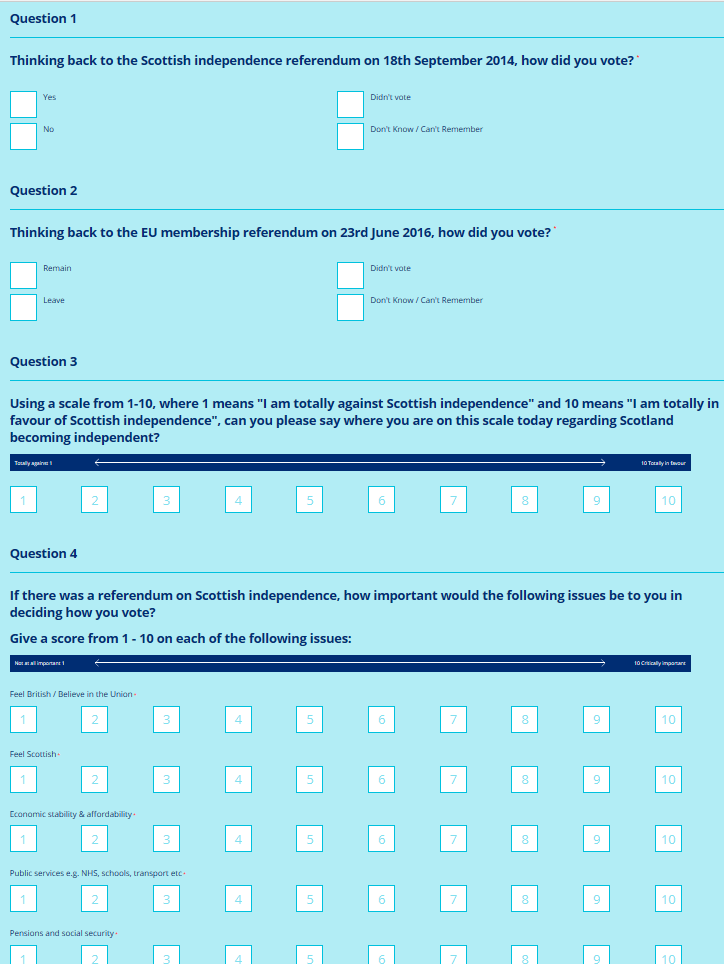 Note the “national conversation” is not one in which the party will argue for Independence. It is just a poll of what people think with no attempt to convince them, as plain in the “activists’ guide” which accompanies it to members. The SNP could simply have paid their pollsters to ask the same questions, with an unusually large sample size of say 10,000, and got a more accurate result than they will from this survey. (All party surveys/canvass returns, always, overestimate their support as those surveyed generally wish to be polite to the person talking to them).

The SNP as an institution is secure in its powerbase in its regional council at Holyrood – let’s not pretend we have a national Parliament yet when we have no say in going to illegal war – and has a lot of well paid people with their feet firmly under the table in Westminster and Brussels. From next year it will dominate Scotland’s councils. The SNP is doing very nicely thank you. As an institution, it has more to risk than to gain from another shot at Independence. Nicola’s havering to put off another effort at Independence has now become ludicrous.

WHY WE NEED AN EARLY INDYREF2

* Scotland’s EU membership will be much simpler if Independence is achieved before Brexit and Scots just remain EU citizens. Leaving and rejoining will be technically and politically far more complicated. I may not be Establishment enough for Nicola’s “expert panel”, but as First Secretary at the British Embassy in Warsaw for four years my main task was Poland’s EU accession and I do know what I am talking about. That gives us just 2 years or less for both Indyref2 and negotiation with rUK. We have to fire the starting gun if we are serious
* If the SNP continue to abjure putting the case for Independence, opinion polls will never move in our favour and may slip further
* Nothing is certain in politics. At the moment there is probably a Holyrood majority for Indyref2, but in 2020 there may well not be.

People will now reply that Nicola is a brilliantly successful politician while I am just a spurned old idealist tapping alone on my laptop. But that is why you should listen to me.

199 thoughts on “Nicola the Haverer”