Here is video of my bifurcated speech on Saturday at AUOB Glasgow. In talking to a large crowd you need perforce to yell, and you can’t really get over much more than headlines of ideas. So this isn’t the (hopefully) thoughtful and intellectual Craig Murray you get speaking at an indoor meeting.

It was a brilliant event. Only a small portion of the marchers stay for the speakers, and 80% of the march had not even reached Glasgow Green yet at the time I was speaking. So between those two factors I don’t suppose I was speaking to above 5,000 people. But it is worth saying that I experienced no negative feedback whatsoever, either in audience reaction or from talking to people afterwards, from taking a much more radical line on various issues surrounding Scottish Independence. It is worth saying that the Yes Movement is organic. There is no “official” view, and my take is no more nor less valid than anybody else’s. But it is evidently not unpopular.

As last year, the Yes Bikers arrived midway through my speech, which is thus in two parts. That is my excuse for loss of fluency towards the end. I am sure I had a peroration in my head somewhere, but struggled to find it!

Many thanks to Brian Fujisan for the video. You can also see it on Independence Live but their production has become too perfect! The sound is superb but you don’t get any crowd noise. If you take out the interaction I sound like a lunatic. OK, more of a lunatic.

It is worth noting, as a demonstration of people power, that Glasgow City Council had attempted to mess this march up by insisting it move its start time from 1.30pm to 11.00am, and the organisers simply told them to get lost, with complete success. The same thing happened when last year the authorities told them they could not rally in Holyrood Park, and AUOB replied “stop us”. Like Extinction Rebellion, this is a sign of a popular mood of protest that refuses to be denied.

There are many arguments about the size of the march. My own estimate would be about 90,000. It was arriving eight abreast for three hours. In terms of percentage of Scottish population, this is the equivalent of a million people marching through London. Yet there was an almost complete lack of television coverage. The next day Andrew Marr hosted Ruth Davidson broadcasting unchallenged that there is no popular demand for Independence. 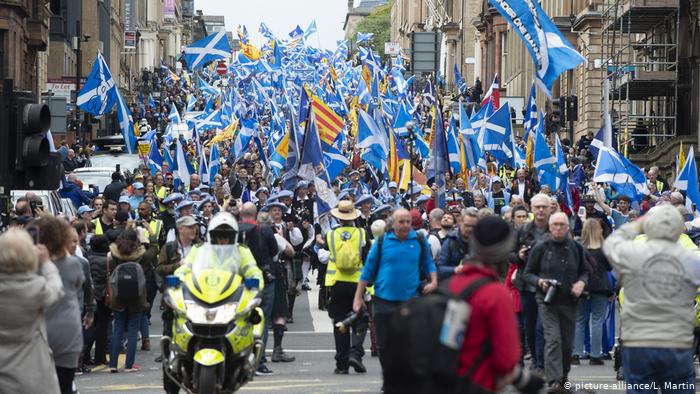 Finally, I had picked up online some accusations about the AUOB organisation and their accounting for the money donated to the marches. I asked the organisers about this, and they readily and at their own instigation gave me complete access to their accounts and records for inspection.

Looking through their records, I can see no grounds for suspicion. Perhaps people do not fully realise the costs involved in putting on such a huge event – for example stage and sound system hire alone costs £5,000. Provision of substantial numbers of portable toilets (which have to be professionally emptied) is expensive. Permits, advertising and publicity, it all adds up. As a director of two music festivals which include precisely the same lines of expenditure, I can say with confidence that AUOB’s figures look absolutely right to me.

Income is of course harder to audit when it is people chucking coins in buckets. The online crowdfunder took £9,993 and can be verified. The collecting buckets at events are unverifiable – but the £3,108 collected in Dundee and the £6,325 collected in Edinburgh feel right. The income from stallholders at the events appears properly accounted for – that appeared to be the source of some of the complaints. I must say it seems to me perfectly reasonable that those organisations with stalls at the rallies are asked to chip in.

Any organisation which collects cash from the public will always be open to somebody dipping their hand in the bucket, but I see nothing that gives me reason to believe that this has happened. It is perfectly possible that some incident really did occur that led to an accusation flying, but we must also be very aware that the agents of the British state would like nothing better than to throw doubt and dissension into the most successful public manifestation of the Independence movement, by magnifying any incident out of all proportion.

After looking through their accounts and vouchers I am now fully confident that nothing is systematically wrong with AUOB and the money that Yessers had trusted them with.