We are now under election broadcasting rules.

Ian Austin left the Labour Party nine months ago. He was then appointed by the Tories as Prime Ministerial Trade Envoy to Israel. As of yesterday, he is neither a MP nor a candidate for election. He is a minor politician who achieved only the most junior ministerial rank, PUSS, and for only seven months. He is best known for heckling Jeremy Corbyn while Jeremy Corbyn was delivering the official Labour response to the Chilcot Report on the illegal invasion of Iraq, shouting “Sit down and shut up” and “You stupid disgrace” at Corbyn for criticising the war. 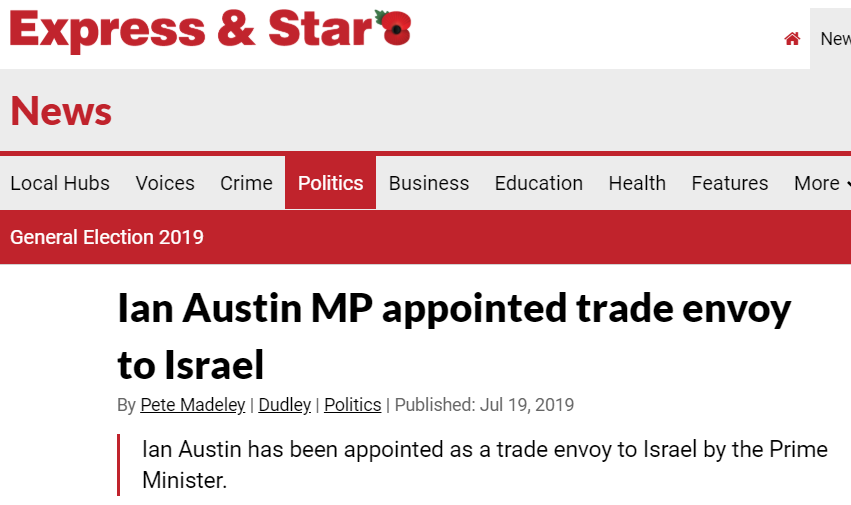 STRANGELY THE BBC FORGOT TO MENTION THIS

We are now under election broadcasting rules. How and why was Ian Austin invited onto the BBC Radio 4 Today programme today? He left the Labour Party six months ago, and has been a huge critic of Corbyn. It is hardly a surprise that the Tory’s Trade Envoy to Israel advises people to vote Tory. So who initiated Ian Austin’s appearance on the BBC Today programme, and why? It is obvious that the BBC knew he was going to urge people to vote Tory – or why invite a non-MP and non-candidate, to say exactly the same things he has been saying since Corbyn became leader?

That the Today programme at the BBC is produced by a Tory, under a Tory BBC Head of News, and hosted by a Tory is established fact and beyond dispute. The facts we need to know are these. Did Austin first contact the BBC or did the BBC first contact Austin? Who took the editorial decision to include this item in the programme? Was any organisation involved at any stage in any of the discussions, or did Austin at all times represent himself purely as an individual?

Following Austin’s vitriolic attack on Corbyn as a racist and anti-semite on BBC Today, he was given eleven full minutes unanswered on BBC Breakfast from 8.56 to 9.07. The presenter stated that they had no official response from the Labour Party.

Yet we are in an election, and under election broadcast rules. The BBC must have known what Austin was going to say – otherwise why invite him on? Why was not another guest invited at the same time Austin was invited, to give balance?

Austin’s appointment as Trade Envoy to Israel is not a Civil Service appointment, it is a political appointment. He is a Tory appointee urging people to vote Tory. Under election broadcasting rules, the massive broadcasting time he is being given must count as Tory time, and be balanced out by broadcast time given to the Labour, SNP, Brexit, Lib Dem and Green parties. I strongly suspect that the BBC is intending to avoid this and claim Austin is Independent so the barrage of “Vote for Boris Johnson” time he is being given does not, they will claim, count as Tory time.

That the state broadcaster connives actively to launch a fierce character assassination of the opposition leader as a racist, and urge everyone to vote for the Government, is a disgrace. That they have not mentioned he is Tory Trade Envoy to Israel is a disgrace. This is not how media behaves in a real democracy. It shows the ferocity with which the UK Establishment will resist the current real threats to its continuing hegemony.

This is very dirty. It is going to get worse.