Now that Liam Fox is back in the Cabinet and Matthew Gould, ex-Ambassador to Israel, in in charge of Security in the Cabinet Office, it is essential to get answers to what happened in at least eight meetings between Adam Werritty and Gould at least some of which involved Mossad – as Cabinet Secretary Gus O’Donnell acknowledged to a parliamentary committee:

Q<369> Paul Flynn: Okay. Matthew Gould has been the subject of a very serious complaint from two of my constituents, Pippa Bartolotti and Joyce Giblin. When they were briefly imprisoned in Israel, they met the ambassador, and they strongly believe—it is nothing to do with this case at all—that he was serving the interest of the Israeli Government, and not the interests of two British citizens. This has been the subject of correspondence.

In your report, you suggest that there were two meetings between the ambassador and Werritty and Liam Fox. Questions and letters have proved that, in fact, six such meetings took place. There are a number of issues around this. I do not normally fall for conspiracy theories, but the ambassador has proclaimed himself to be a Zionist and he has previously served in Iran, in the service. Werritty is a self-proclaimed—

Robert Halfon: Point of order, Chairman. What is the point of this?

Paul Flynn: Let me get to it. Werritty is a self-proclaimed expert on Iran.

Chair: I have to take a point of order.

Robert Halfon: Mr Flynn is implying that the British ambassador to Israel is working for a foreign power, which is out of order.

Paul Flynn: I quote the Daily Mail: “Mr Werritty is a self-proclaimed expert on Iran and has made several visits. He has also met senior Israeli officials, leading to accusations”—not from me, from the Daily Mail—“that he was close to the country’s secret service, Mossad.” There may be nothing in that, but that appeared in a national newspaper.

Chair: I am going to rule on a point of order. Mr Flynn has made it clear that there may be nothing in these allegations, but it is important to have put it on the record. Be careful how you phrase questions.

Paul Flynn: Indeed. The two worst decisions taken by Parliament in my 25 years were the invasion of Iraq—joining Bush’s war in Iraq—and the invasion of Helmand province. We know now that there were things going on in the background while that built up to these mistakes. The charge in this case is that Werritty was the servant of neo-con people in America, who take an aggressive view on Iran. They want to foment a war in Iran in the same way as in the early years, there was another—

Chair: Order. I must ask you to move to a question that is relevant to the inquiry.

Q<370> Paul Flynn: Okay. The question is, are you satisfied that you missed out on the extra four meetings that took place, and does this not mean that those meetings should have been investigated because of the nature of Mr Werritty’s interests?

Sir Gus O’Donnell: I think if you look at some of those meetings, some people are referring to meetings that took place before the election.

Q<371> Paul Flynn: Indeed, which is even more worrying.

Sir Gus O’Donnell: I am afraid they were not the subject—what members of the Opposition do is not something that the Cabinet Secretary should look into. It is not relevant.

But these meetings were held—
Chair: Mr Flynn, would you let him answer please?

Sir Gus O’Donnell: I really do not think that was within my context, because they were not Ministers of the Government and what they were up to was not something I should get into at all.

Q<372> Paul Flynn: No, it is not a final question. I am not going to be silenced by you, Chairman; I have important things to raise. I have stayed silent throughout this meeting so far.

You state in the report—on the meeting held between Gould, Fox and Werritty, on 6 February, in Tel Aviv—that there was a general discussion of international affairs over a private dinner with senior Israelis. The UK ambassador was present…

Sir Gus O’Donnell: The important point here was that, when the Secretary of State had that meeting, he had an official with him—namely, in this case, the ambassador. That is very important, and I should stress that I would expect our ambassador in Israel to have contact with Mossad. That will be part of his job. It is totally natural, and I do not think that you should infer anything from that about the individual’s biases.

Gus O’Donnell was being examined on his Cabinet Office report into the Fox/Werritty affair, which contained the blatant lie that Gould and Werritty had only met on two occasions. In fact they met eight times that we know for certain, with Gould’s role being:

You can find full details here.

As O’Donnell states, some of the Werritty/Gould meetings happened when Fox and the Tories were not even in power. My own Freedom of Information request for all correspondence between Adam Werritty and Matthew Gould was denied as it would “breach the cost limit”. What is the purpose of the Freedom of Information Act if something as simple as correspondence between two named individuals is refused on grounds of cost.

Astonishingly, the request was denied within one hour of being submitted, and after 11pm!!!!! In reply to a further Freedom of Information Act request for minutes of the meetings between Gould and Werritty while Gould was Private Secretary to Hague and Miliband, the FCO quite literally sent me two blank pages with everything redacted except the date!!!

Various MP’s, including Jeremy Corbyn and Caroline Lucas, dragged out the information bit by bit, like drawing teeth.

The media were by and large prepared to treat the Werritty/Fox scandal purely as sniggering homophobia. Only the Independent reported the actual story 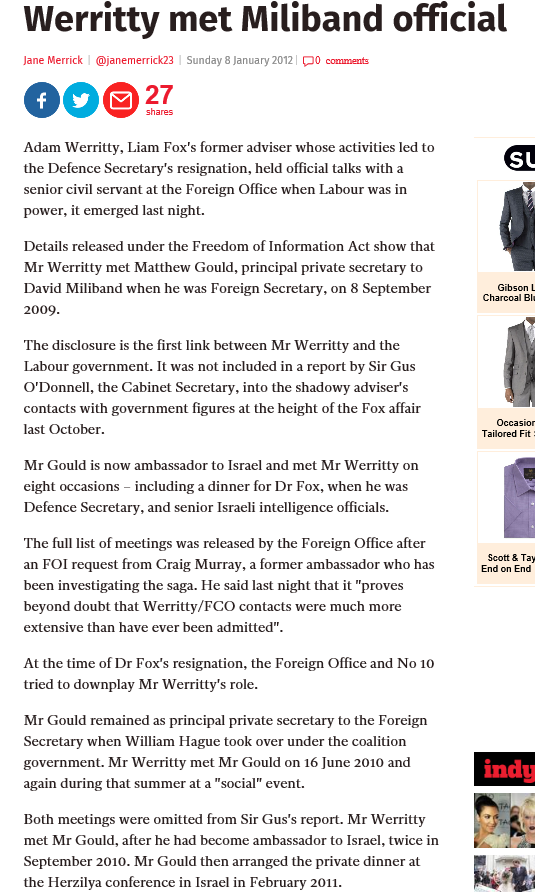 Fox’s resignation enabled the media to bury the real scandal, which was Israeli government influence on both Red and Blue Tories.

I therefore request everybody who reads this to write to their MP and ask them to find the following information. Here is a draft you may utilise, but the more you customise it the better:

I am concerned about unresolved questions from the Adam Werritty affair, and I should be grateful if you could discover the following information for me.

1) On how many occasions did Cabinet Office official Matthew Gould meet with Mr Adam Werritty, either
a) in a personal capacity
b) in an official capacity

I have been informed of at least eight such meetings which have been collected together from parliamentary questions and FOIA requests. I am concerned that only two of these meetings was detailed in the Cabinet Secretary’s report into the Adam Werritty affair.

Can you discover why so many of these meetings were omitted from the O’Donnell report?

I should be most grateful for your assistance.

You can write to your MP via this website , though I awlays prefer to send a physical letter to the House of Commons. I should be most grateful for your assistance in doing this, and in spreading this appeal around by social media.

It is to me disgusting that a politician so thoroughly disgraced as Liam Fox should be back in power. Answers were blanked on the actual purpose of the Werritty connection, and I think collectively we should try to do something about that.

998 thoughts on “Fox, Gould, Werritty and Israel – Please write to your MP”