I do not think that any work I have done has brought me as much abuse as that on the transfer of 6,000 square miles of Scottish sea to England in 1999, effected by New Labour by Order in Council literally the day before the Scottish Parliament came into being.

Some of this criticism has been utterly bizarre, including a strange contention that the whole thing did not happen and the legislation does not exist. A marginally more rational criticism has been the contention that the new boundary – which at its extreme limit eastwards runs north of Carnoustie – reflects a genuine median line influenced by the shape of the coastline.

With thanks to this map kindly sent by Dave Philip, I wish to explain why the new boundary is not legitimate. 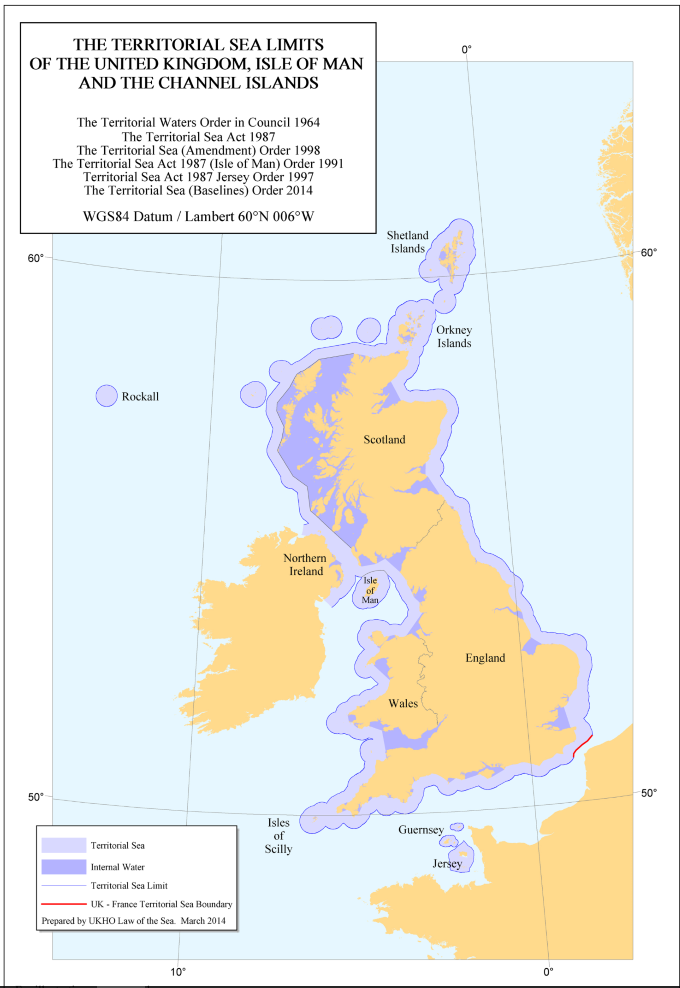 I do urge you to pay attention. This is important but complex.

This map shows internal waters and the territorial sea. Internal waters are, for legal jurisdictional purposes, land. The territorial sea extends for twelve miles and the law of the coastal state applies within this area. There are two further zones not shown on this map. The Exclusive Economic Zone extends for 200 miles or to a boundary with another state, and as the name says confers on the coastal state the exclusive right to the resources of the sea and seabed. Beyond that can stretch the continental shelf, where the seabed mineral resources are still available to the coastal state where there is a geological continuation.

The area of England/Scotland potential dispute is in the North Sea and relates particularly to the Exclusive Economic Zone. This simply extends out much further than the territorial sea but on the same contours. It is not shown on this map but the baselines from which it is measured are.

The Territorial Sea and Exclusive Economic Zone are measured out from the coastline. But where a coastline is either a) archipelagic or b) highly indented, the coastal state is entitled under the UN Convention on the Law of the Sea to draw straight baselines between coastal points and measure its territorial sea/exclusive economic zone from those baselines rather than from the coast.

This is the key point at issue here. The extraordinary northward trend of the 1999 England/Scotland is caused solely by the massive indentation of the Lothian coastline as it curves into the Firth of Forth. Now look closely at the map. In Western Scotland, there are straight baselines in places far out to sea, and huge areas of sea are designated as “internal waters”. By comparison, in Eastern Scotland the straight baselines are extremely small and conservative by international standards and very little sea is designated as internal water.

The Western baselines have almost no impact on the Scottish/England boundary because of the position of Northern Ireland. But in the North Sea, where they would impact massively on the England/Scotland border in Scotland’s favour, they take a markedly minimalist approach in stark contrast. Remember, we are talking about the Exclusive Economic Zone not shown on the map. extending out 200 miles from the baselines.

After independence I would make a maximalist claim and draw a straight baseline from Eyemouth to Peterhead, enclosing the highly indented coastline. Then measure and delimit the seas from there. This would straighten the England/Scotland border back towards the traditional East West alignment. In so doing, I would make plain that this would not involve any claim to push the outer limits of Scottish seas further or to adjust the boundary with countries across the North Sea; it would merely affect the angle of the England/Scotland border and where the England/Scotland border strikes the tripoint. I would be prepared to pull back that baseline a bit in negotiation. I am a former Head of the Maritime Section of the Foreign and Commonwealth Office and have actually negotiated maritime boundaries for the UK in real life. These things are very much a negotiation, which infuriates the academics who like to believe they are issues of pure geometry.

There are two other points worth considering:

1) The UK has never claimed international boundaries are a matter of pure geometry. Its boundaries are always officially characterised as a modified median line, to acknowledge the give and take of negotiation.
2) The UN Convention on the Law of the Sea does not mandate that the boundary has to be a median line. Other factors may be taken into account including historical jurisdiction. This is a major further argument in Scotland’s favour.

I apologise for the length and detail of this, but the facile and ill-informed criticism had become somewhat annoying.