As Porton Down now confirm, here is a straightforward lie from the Foreign and Commonwealth Office, a lie that British diplomats around the world have been promoting to foreign governments. 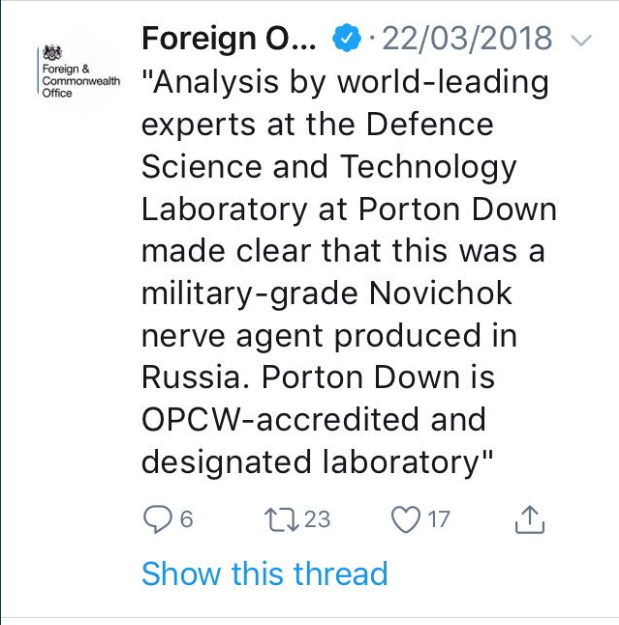 The key point is that the FCO knew it was lying. This was published six days after I was told by an FCO source, and published, that Porton Down scientists were refusing to say the substance came from Russia. The FCO knew this.

I have now received confirmation from a well placed FCO source that Porton Down scientists are not able to identify the nerve agent as being of Russian manufacture, and have been resentful of the pressure being placed on them to do so. Porton Down would only sign up to the formulation “of a type developed by Russia” after a rather difficult meeting where this was agreed as a compromise formulation. 16 March 2018

There has to be some kind of redress for this. If we accept that we live in a society where the public bodies that are supposed to serve us, can lie to us and to the world in order specifically to heat up a cold war, then the future is bleak. This is a direct consequence of the lack of suitable punishment for those involved in the crime of creating lies to wage aggressive war on Iraq, particularly Tony Blair, Richard Dearlove and John Scarlett. As they are not in jail, Boris is confident he will not be either.

We have learned nothing from the Iraq War experience, and what is most disheartening is that officials within the FCO and security services still do not see it as their job to prevent lies rather than to propagate them when asked by a Minister.

Here is a screenshot of a FCO video showing Laurie Bristow, British Ambassador to Russia, in Moscow telling outright lies to gathered diplomats at a briefing there. The subtitle is accurate. 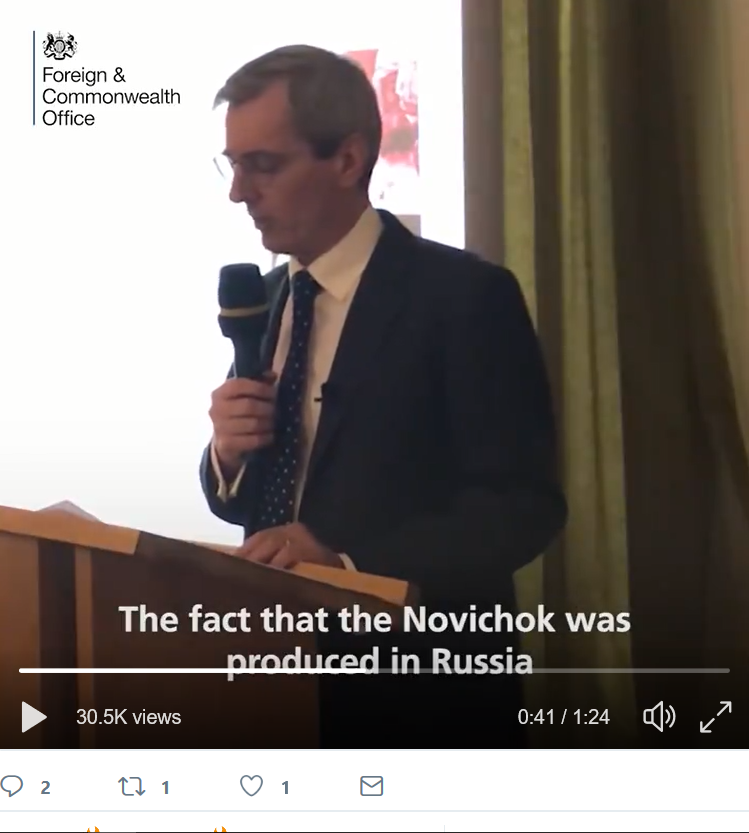 I have long held the opinion that Bristow is a deeply repulsive individual with no morals or scruples. When I was sacked as British Ambassador to Tashkent for criticising Uzbekistan’s human rights record and objecting to MI6 use of intelligence from the Uzbek torture chambers, Bristow went to Tashkent after my removal to assure the Uzbeks that the UK had no interest in human rights and wished to continue “intelligence cooperation”. That somebody like Bristow can become one of Britain’s most senior Ambassadors says all you need to know about the United Kingdom today.

391 thoughts on “The Poison in our Body Politic”