A Google news search reveals that not one single mainstream media outlet has mentioned Shai Masot in 2019. Not even once. 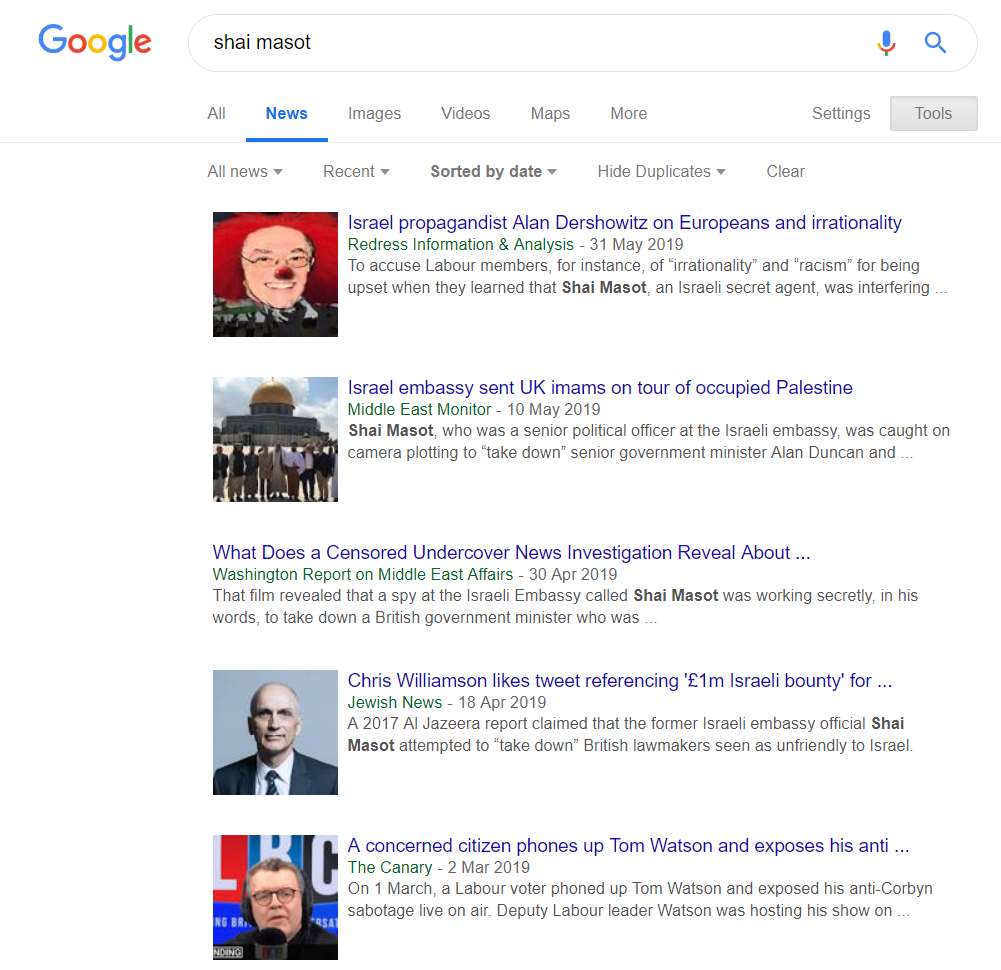 Yet the main political news story the last two days has been the suspension of Labour’s Peter Willsman for “anti-semitism” for making the suggestion that the “anti-semitism” witch-hunt is promoted by the Israeli-Embassy. This has been demonstrably a massive story: 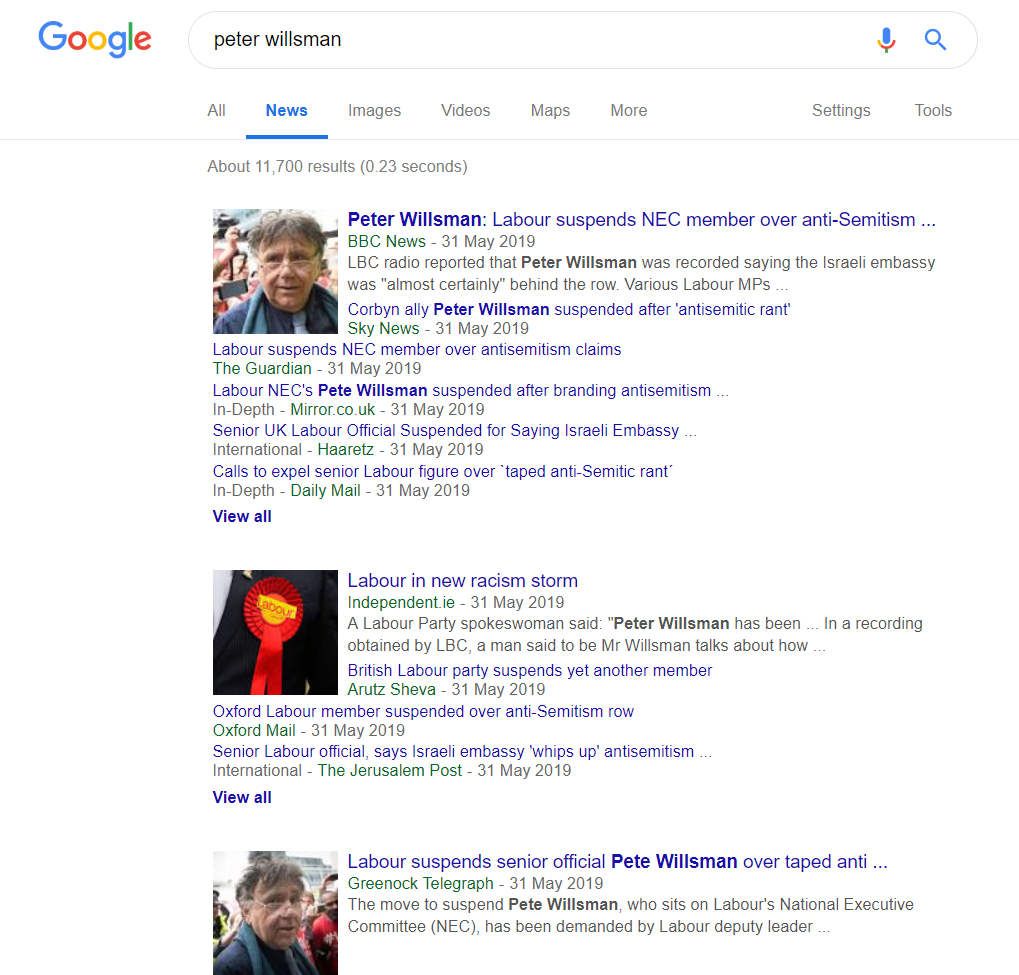 The overwhelming majority of the tens of thousands who will read this article know who Shai Masot is and know why his activities are absolutely central to the Willsman story.

And here is the truly terrifying thing.

The overwhelming majority of the mainstream media “journalists” who produced those scores of stories about Willsman also know exactly who Shai Masot is and why his activities are central to the Willsman narrative. And every single one of those journalists chose to self-censor the crucial information that casts a shade over the “Willsman is an anti-semite” line. Every single one. Their self-censorship is not necessarily a conscious and singular act, though in many cases it will be. They are simply imbued with the line they are supposed to adopt, the facts they are supposed to ignore, to forward their career and remain accepted in their social group.

Because the plain truth is that the Al Jazeera documentary The Lobby (part 1 below) showed to the entire political world that Mr Willsman’s thesis about the involvement of the Israeli Embassy in British politics and its objectives is broadly true. It says something about the current dystopia that is the UK, that this truly shocking documentary did not result in any official action against Joan Ryan (who has thankfully since hurtled herself into the political abyss), but that pointing out the undeniable truth about Israeli Embassy interference in British politics is an expulsion offence.

I should be very happy to go on the BBC and say this and so would many other people. Yet the mainstream media have been unable to quote this point of view from a single person. Yesterday’s 12 noon news on the BBC had Willsman as the top story with interviews with first Charlie Falconer, calling for Mr Willsman’s expulsion, then a six minute live rant from extreme zionist John Mann, calling for Mr Willsman’s expulsion. There was no attempt to balance this at all with a remotely sane guest. To be fair, the presenter did baulk at some of Mr Mann’s more frothy mouthed utterances, but the BBC knew precisely what they would get when they invited him, and the decision to have a major news item with only two intervewees, both from the same side of the argument, was a quite deliberate one.

This was a much worse example of lack of balance than those for which Russia Today is routinely censured by Ofcom and threatened with closure. But doubtless as it was a pro-Israel and anti-Corbyn lack of balance (Corbyn was condemned by both interviewees) Ofcom will take no action whatsoever. I am however putting in a complaint to Ofcom about this specific news item and I urge you to do the same.

Al Jazeera’s exposure of Shai Masot led to his quietly being removed from the UK, however he was but the tip of the iceberg. With my FCO inside knowledge I could show that the Israeli Embassy has an extraordinary and disproportionate number of “technical and administrative staff” like Masot, and that there was a mystery over what kind of visa he had to live in the UK. The FCO refused to answer my questions and no mainstream media “journalist” was willing to pursue the case.

The readership of this blog has grown fast over the last two years. I therefore do recommend that you read this blog post which ties in Masot’s activities to the Mossad collaboration of Liam Fox and Adam Werritty – which was the real story behind the Werritty scandal, again completely hidden by the mainstream media. I should mark my debt to the late Paul Flynn MP in helping me prove that fact beyond dispute, as you will see if you read the article. Not one of the media and political hypocrites who so recently eulogised Paul was willing to support him in this or even mention the facts that he had winkled out. Jeremy Corbyn also helped me expose the Werritty/Israel links in his pre-leadership days by asking parliamentary questions.

I do blame Jeremy for not taking a more robust line. Genuine anti-semitism should always be called out and condemned, and it plainly exists, even in the Labour Party. But the open attempt to stifle all criticism of Israel, and in effect to make adherence to zionism a pre-condition for membership of the Labour Party – or indeed acceptance in wider society – is a vicious form of authoritarianism that should have been repudiated robustly from day one.

345 thoughts on “The Incredible Disappearance of Shai Masot”