Every half hour BBC News is running a three minute puff piece which is even more sinister for what it hides than for what it says – and By God! That is sinister enough.

“Now the BBC has learned about an alternative No campaign which calls itself No Borders a group determined to rouse the emotions many feel about being Scottish but also British.  Gavin Essler has this exclusive report:”

GAVIN ESLER: “A recording studio on the outskirts of Edinburgh.  A group of musicians putting the finishing touches to a song which they hope could save the United Kingdom”

(Pretty girls caterwauling unpleasantly). The song is part of a new campaign called No Borders.  Their website goes live today on the anniversary of the Union”

(Long speech by Malcolm Offord of No Borders – not a single question asked).

GAVIN ESLER (orgasmic voice): “Here in the very heart of Glasgow in fact almost anywhere you go anywhere in Scotland you’re never far away from our three hundred years of shared British history…. Putting the passion into the campaign to save the United Kingdom is exactly what No Borders say they are about.”

(Another statement from Malcolm Offord.  Still not asked any questions).

GAVIN ESLER ‘The idea is a grassroots campaign to rival that of the pro-independence campaign, based on those who wish to remain in the UK.  A retired care nurse from Glasgow Elizabeth Bashir is one of those who has given her testimonial.

(14 seconds to spokesman for Yes campaign – presumably this is BBC “balance”.)

GAVIN ESLER “In the music industry they say you should never rewrite a hit, and No Borders say the Union has been a great hit worldwide for three hundred years.  But others say it might be time to sing a new song.”

Now this long propaganda piece for the No campaign is disgusting in itself for its internal bias, and for the fact that the very much larger grassroots movement the Radical Independence Campaign has never been given any publicity by the BBC (and the failure to reference the longstanding anarchist No Borders movement).  It is not even news – it is two days since “Vote No Borders” was given an even longer bout of free publicity on Newsnight Scotland.

But what makes this propaganda utterly unforgiveable is that Vote No Borders is not a grassroots campaign at all but a government organized campaign which has mysteriously acquired start-up cash of 400,000 pounds with no declared origin.

The registered office of Vote No Borders, a private limited company, is at 24 Chiswell Street, London, EC2Y 4YX . Which is perhaps surprising for a “Scottish grassroots campaign”.  The directors are Malcolm Offord and Fiona Gilmore.

Now pay close attention: Fiona Gilmore is chief executive of Acanchi a PR Consultany which specializes in “Country Branding”.  Its clients include Israel, Dubai, Bahrain and “England”.  Yes, it actually specifies “England” on the company website.  Acanchi also works for DFID – in short, it gets UK taxpayers’ money, plus Israeli and Gulf Arab money.  Are you familiar with the word fungibility?

Malcolm Offord, it turns out, has donated over 120,000 pounds to the Conservative Party plus made personal donations to Michael Gove.  He is the author of the report “Bankrupt Britain” on the Conservative Home website.  In his paper Offord suggests that further cuts in UK public spending should continue to be made  even after the present debt crisis has been passed and urges government to:

“Reform the bloated benefits system of this country to reduce the burden on the state and, just as importantly, boost the growth rate of the country”

And the wee retired care home nurse Elizabeth Bashir?  Well, she’s not quite as “grassroots” as shown by the BBC either. 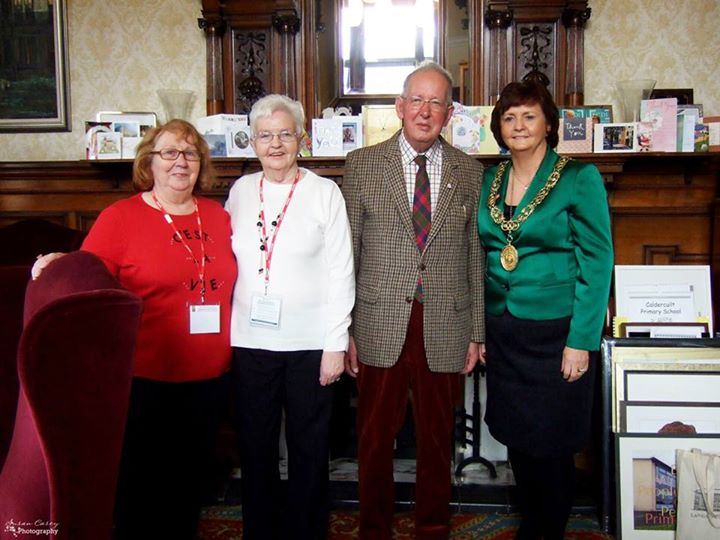 That picture is definitely the “grassroot” Elizabeth Bashir interviewed by the BBC.  There is also an Elizabeth Bashir from Glasgow on Facebook who “likes” Vote No Borders [reference here deleted as it has been pointed out, I think fairly, it was to something probably meant as a joke]. This lady has expensive tastes for a grassroot, her other “likes” are Svarovski Crystal, the swanky Aura club in Mayfair and Faz Collection clothes.  Strangely although she calls herself Elizabeth Bashir, Glasgow and supports Vote no Borders, everything she “likes” which has a geographical location is in London.  It is conceivably a different Elizabeth Bashir from Glasgow, perhaps a daughter, but the coincidence of the Vote No Borders like is very strong.

It took me an hour with google to find all this.  That the BBC continues to propagandise this fake “grassroots campaign” without revealing Offord’s Tory Party credentials, his belief in never-ending cuts in public spending and welfare benefits, and Acanchi being a consultant paid by government to boost the UK image is completely beyond anything that can remotely be described as legitimate.

It is the most abhorrent example of a fake story, entirely contrived state propaganda, being put out by a state broadcaster.

From commenters below: The “Vote No Borders” website domain was registered by Gary Waple, who works in the Prudential Regulatory Authority of the Bank of England!!!! Before that he worked at the Central Bank of the United Arab Emirates – that British government and Gulf money connection pops up again.

The Guardian also is pushing it.  Amazing how neither the BBC nor the Guardian noticed who Mr Offord was, or who his fellow director is, or asked where the money came from.  We have a huge responsibility in social media to combat the ultra-powerful combination of the entire mainstream media with the British state, the City of London and their overseas neo-con allies.

I ask every single person who reads this to do what they can do to get this news out – it may open eyes about the BBC, media in general and the hidden hands behind the No campaign.  Feel free to copy and paste anywhere you want.  But please everybody either blog or tweet about it, put it on your facebook page, email people about it or if you can’t do any of those, just tell three people.  The only way we can beat the massed forces of the state and the ultra-rich is by a deliberate and purposeful exercise of people power.  That will never happen unless everybody tries. Do something.  Now. It does not matter where you are in the world.  Knowledge is universal – that is the root of every power the people can hope to have.

Brilliant! This post is currently being read by more than one person every two seconds. I hope it’s being read some other places by now too.  Don’t stop, we need much more than that to equal the numbers who will view the execrable mainstream propaganda.