I am an anti-militarist. But I believe violence in defence can be justified. The Israeli mass killings by bombing in Gaza are absolutely unjustified. I also oppose the random and ineffective rockets being fired from Gaza into Israel. But when Israeli ground troops actually move into Gaza, it is my sincere hope that the Palestinians kill as many as are necessary to stop them. That is justified, legal and necessary. 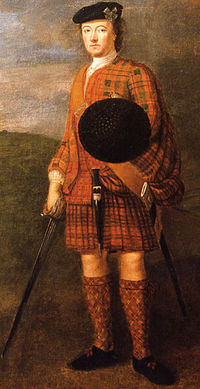 This is Lord George Murray, painted in 1745. He is wearing a kilt. 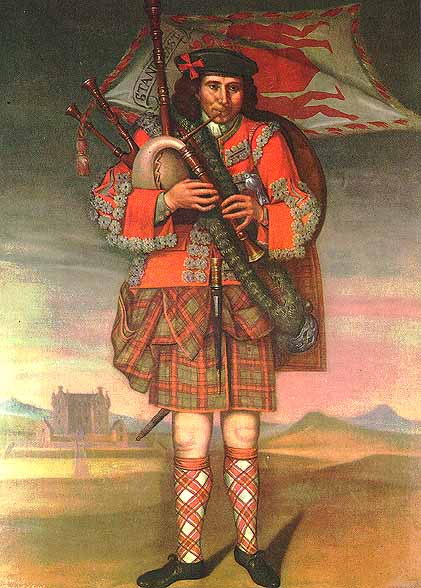 Tartan type designs go back thousands of years among Celtic tribes, becoming more complex over time as technique developed. The kilt evolved from the belted plaid. Kilting – the sewing in of the pleats rather than gathering them under the belt – was an obvious convenience for people who could afford a separate blanket and apparel. Lord George’s 1745 costume is certainly kilted. The appearance of the small kilt – cutting off the piece over the back and shoulders – came in from about 1700.

Yet generations of Scots had it drummed into them that the kilt is not real at all, it is an entirely phoney Victorian invention dreamed up by the Prince Regent and Walter Scott. This denial of their own culture comes out viscerally, as in the reaction to the uniforms for the Commonwealth Games. Take Kevin McKenna in the Guardian:

“The modern kilt is a fey and ridiculous representation of the robust Highland dress in which the Jacobites went into battle against the Hanoverians”.

That is simply not true. Here is a light article on the kilt I wrote for the Independent a few years ago. If you look at the comments underneath, people simply spluttered and asserted the same denigrations they had been told. Scottish culture never existed. Bagpipes and kilts were Victorian inventions for shortbread packets.

Does it matter? Well, yes. It matters because it is a small part of a long term mis-education of a people about their own history and culture. It is of a piece with the absolutely untrue, but widely held belief, that there were more Scots on the English than Scottish side at Culloden (the real ratio was over 4 Jacobite Scots to every Hanoverian Scot in the battle), that the Jacobites were Catholic (less than 25%), that Charles Edward Stuart believed in the Divine Right of Kings (he explicitly did not). Most pernicious of all has been the airbrushing from history of the avowed aim of Scottish independence of the large majority of both the leaders and followers of the 45, including Lord George Murray.

I do not want you to misunderstand me. I have no yen for the Stewarts – my concern is how to get rid of the monarchy. But the generations of denigration of Scotland’s history, its reshaping to suit a Unionist agenda where the backwards and benighted Scots were brought in to the political and economic glories of the Union and British Empire, underlies so many of the attitudes to Scottish Independence today. Every culture has a right to reference its roots and history without ridicule – and the denial of the authenticity of genuine popular cultural heritage is a particularly pernicious form of ridicule, especially when it is built on lies drummed home in schoolrooms over centuries.