Skip to content
Home » Uncategorized » Barbarians at the Gates 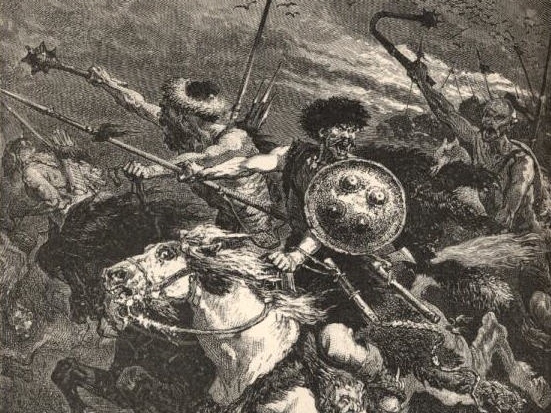 A Typical Raiding Party of Corbynistas and Cybernats

A key weapon of the neo-liberal establishment in delegitimising the emergence of popular organisation to the left, is to portray all thinkers outside the Overton window as dangerous; actively violent, misogynist and racist.

WikiLeaks have once again done the world a great service by publishing smoking gun evidence that the Democratic National Committee – which was supposed to be a neutral body overseeing the Democrats primary election – was doing everything possible to tilt the field against Bernie Sanders. Just one of the ways that was done was by secretly promoting to the media the idea that Sanders’ supporters were violent, misogynist and intimidatory thugs.

One of the major events used to further this trope was the Democratic state convention in Nevada. This is a powerful demonstration of a phenomenon that we are witnessing daily in the UK – the use of the mainstream media to perpetrate the trope, despite the existence of irrefutable evidence that the narrative being put forward by the mainstream media is factually untrue. I have posted this video before, but please look at it now, whether again or for the first time. This is video of the actual events at Nevada taken from the heart of the “Barbarian crowd of Sanders supporters. The media characterisation of the events you are watching – a characterisation that was spread in active collusion between the media and neo-liberal politicians – includes accusations which we see repeated again and again, of violence, physical threat, misogynist abuse and spitting. What the actual evidence shows is something which we are seeing again and again as the actual reality – neo-liberal members of the paid political class astonished and indignant that their “position” and authority is not being treated with deference by ordinary people. Watch the video.

It is important to say that there is a lot of other video evidence available. This is the clearest I can find. No evidence appears anywhere online which bears out the stories of violence, abuse and spitting – which is quite astonishing given that the entire mainstream media carried and promoted those stories.

The Labour Party constituency meeting at Brighton gives us a precise analogy to the Nevada Democrats meeting. Again claims were made of violent intimidation, swearing and spitting. Again, in this age where everybody has a video camera in their pocket, there is absolutely zero objective evidence of this behaviour and a great deal of evidence to the contrary. It appears the real sin of the Brighton Labour Party members was to elect pro-Corbyn officers. That election has now been annulled. The National Executive Committee of the Labour Party is playing precisely the role against Corbyn that the NDC played against Sanders.

None of this is new. From the start, the Labour establishment has attempted to portray ordinary members as thugs. 7 months ago Stella Creasy claimed that a violent and intimidatory mob had gathered outside her constituency office, and in consequence she and her staff had been too scared to go to work. Here is a video of the actual incident.

Again the obvious and glaring disparity between what actually happened – this “peace vigil” was led by the local vicar to urge Creasy to withdraw her support for bombing Syria – and what Creasy claimed had happened, was ignored by the mainstream media. The mainstream media has become the home of fact free journalism. If you want to find anything approaching truth, you have to go surfing the social media.

It is highly significant that among the “demands” made in a recent letter by 44 anti-Corbyn female MPs was that demonstrations at their offices should be banned, and anyone who participates in one expelled from the Labour Party. I think that in itself says enough about their sense of entitlement and attitude to free speech.

Just a couple more examples of many score I could give. The “brick through Angela Eagle’s window” story is repeated continually by the mainstream media to show the violence of Corbyn supporters. But in fact the broken window was in a stairwell of an office block, actually on a different face of the building to the one on which Angela Eagle’s office has windows. There is no evidence at all that Ms Eagle’s office was the target, let alone that a Corbyn supporter was the perpetrator. I have been able to find no evidence of the existence of the brick. What is interesting, is that on this common stairwell, not connected to the Labour Party, a Party poster was used to close up the void, thus giving a photo opportunity that all of the mainstream media used and reinforcing the false impression – more than impression, false statement in the entire mainstream media – that it was Ms Eagle’s window that was broken. How did this happen? Emergency glaziers carry boards. I have also seen no evidence of the existence of the brick. Was it a literal brick? Where did it come from? Or was it, perhaps, a lump of Portland cement?

My all time favourite for mainstream media distortion of a story comes, naturally, from the BBC. Labour MP Marie Rimmer has been brought to trial for kicking a canvasser. This is how the BBC reported it. This really is beyond satire. 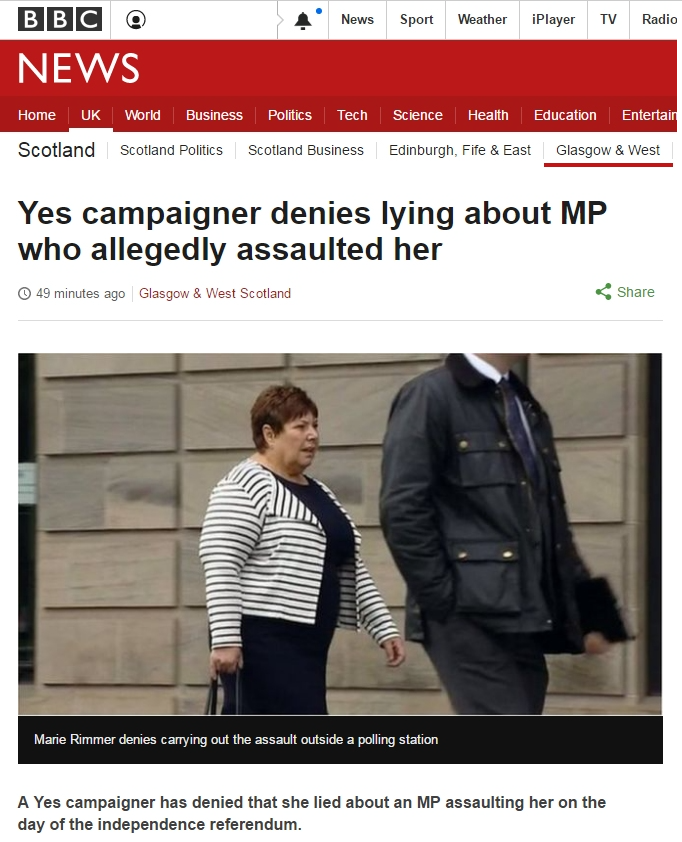 To us Scottish nationalists, the portrayal of those who challenge the status quo as violent and racist is something that we have lived with for years. That is why I use the expression “vauntie cybernat” at the top of my blog, “cybernat” having become the mainstream media term for barbarian during the referendum campaign.

The smearing of critics of the status quo being violent, threatening racists and misogynists was demonstrated perfectly in the killing of the petition against the BBC’s obnoxiously right wing and obviously biased political correspondent, Laura Kuenssberg. A whole wave of obscene, vile and threatening online abuse was alleged to be associated with the petition, but careful investigation – of which zero was done by the mainstream media – proved this to be an outright lie.

Finally, we come to the slur that Corbyn supporters are anti-Semitic. As I have stated before, one obvious flaw in this charge is that almost all Corbyn supporters enthusiastically cheered on Bernie Sanders. Again, the slightest examination of the facts shows that in many cases the accusation absolutely does not stand up, as with the Ruth Smeeth incident where the man demonstrably did not say what she quoted him as saying. Again the mainstream media had no interest in simply provable actual fact.

What has been extremely reprehensible has been the tendency to the mainstream media to slip in, as the Guardian did with the case of Luciana Berger, examples of genuine and appalling anti-Semitic abuse, without making clear that in these cases the perpetrators (and somebody was convicted) were from the far right and had absolutely nothing to do with Corbyn and his supporters. Much the same is true of references to the murder of Jo Cox.

The Establishment will always attempt to characterise any root challenge to its hegemony and ideology as violent, atavistic and subscribing to appalling beliefs and behaviour. The theme of challengers as “Barbarians” runs through history. We will have to put up with it for some time. The good news is, they are seriously rattled.

229 thoughts on “Barbarians at the Gates”